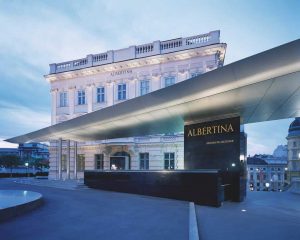 Albertina Museum is an ancient museum built in the seventeenth century as a fortification but has undergone several changes over the years with different rulers. Up until 1919, it was a private property by was acquired by the newly founded Republic of Austria and established in 1921. Albertina museum located in the First District (Albertinaplatz 1), Vienna Austria. It was destroyed during the war in 1945, but rebuilding exercises were done after the war. Renovation efforts had taken place up to the year 2003 when it came to completion as a modern museum housing the largest print room in the world. It is easily accessible by tourists due to the improved road access and availability of public transit, making it a desirable destination.

Besides being home to the most prominent and most significant print room in the world, the Museum houses various artwork like old drawings, impressionists, and master prints, as well as the modern graphics and illustrations. From recent reports, over one million master prints sit in the Museum as well as over sixty thousand pictures. Some of the well-known pieces of art in the Museum are The Great Piece of Turf painting by Albrecht Dürer in 1503, The Libro de’ Disegni (Book of Drawings) gathered, sorted and grouped by Giorgio Vasari, The Painter. The Buyer is a 1565 painting by Pieter Bruegel the Elder, among others ranging from lists of Architectural designs, photographs, among other famous beautiful art pieces. The artefacts, as noted, is ancient, but are kept in perfect condition in the museum store. They are, however, hung on the walls every five years for an exhibition.

One of the famous artists whose piece of work you will not miss at the Museum is Albrecht Dürer. Albrecht Dürer, born in Nuremberg in May 1471, was a painter, printmaker and a member of the movement of artists in northern Germany. His reputation was widespread across Europe because of the quality woodcut prints he produced in his twenties. Durer, a wide range of work range from Engravings, Prints, altarpieces, portraits, watercolours, and paints. Durer’s reputation became widespread across Europe and the world. It was considered an SI unit for the succeeding generations, especially in printmaking, unlike Engraving, which proved to be a huge challenge for his predecessors.

This autumn September 20th 2019 until 6 January 2020, Albertina Museum presents a unique opportunity to art-history lovers giving them a chance to catch a glimpse of this impeccable art that is several centuries and decades old. The exhibition is such a unique opportunity to have all the works done by Albrecht Durer in one room on a special occasion to celebrate a legend for the fantastic job done. He has, over the years, been such a tremendous inspiration to upcoming artists. Then, once in a millennium exhibition will also see the unravelling of the International Loan works.
Remember, this unique occasion will run until 6 January 2020.