Synthetic resin pencil, without wood, made with recycled material, does not splinter in case of breakage. Personalized digital printing on the entire pencil with Leonardo da Vinci’s Vitruvian Man. Ø 0,7 x 18,5 cm. 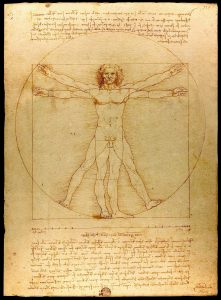 The Vitruvian Man originally known as Le proporzioni del corpo umano secondo Vitruvio, lit. ‘The proportions of the human body according to Vitruvius’) is a drawing made by the Italian polymath Leonardo da Vinci in about 1490. It is accompanied by notes based on the work of the Roman architect Vitruvius. The drawing, which is in ink on paper, depicts a man in two superimposed positions with his arms and legs apart and inscribed in a circle and square. It is kept in the Gabinetto dei disegni e delle stampe of the Gallerie dell’Accademia, in Venice, Italy, under reference 228. Like most works on paper, it is displayed to the public only occasionally, so it is not part of the normal exhibition of the museum.

The drawing represents ideal human body proportions. Its inscription in a square and a circle comes from a description by the ancient Roman architect Vitruvius in Book III of his treatise De architecture. Yet, as it has been demonstrated, Leonardo did not represent Vitruvius’s proportions of the limbs but included those he found himself after measuring male models in Milan. While the drawing is named after Vitruvius, some scholars today question the appropriateness of such a title.

There are no reviews yet.

Only logged in customers who have purchased this product may leave a review.