On 26 February the Picasso Museum in Malaga inaugurated an exhibition on the figure and history of Olga Khokhlova, the first wife of Pablo Picasso, which will last until 2 June 2019.

The exhibition arises from photographs and letters found in Olga’s travel trunk, which cover the years they shared as a couple. Thanks to the discovery, it has been possible to know another perspective of the realization of some paintings by Pablo Picasso, taking into account the historical and social framework, as well as the personal history that surrounds it.

Olga Khokhlova (Nezhin, Ukraine 1891 – Cannes, France 1955) daughter of a colonel of the Russian imperial navy was a dancer who started in the prestigious dance company “Russian Ballets” in 1911. An innovative company that had great success in Europe at the beginning of the 20th century.

Olga and Pablo met in 1917 in Rome, when the artist was making the sets and costumes for the ballet Parade. They married on July 12, 1918 in Paris, and in February 1921 Paulo, their first and only son, was born. Although they remained married, the couple separated in 1935. Olga finally died in Cannes in 1955.

When her son inherited the Boisgeloup mansion, now owned by FABA (Almine and Bernard Ruiz-Picasso Foundation for Art), he found Olga’s travel trunk, the only thing she kept after her separation with Pablo. Thanks to its content, it has been possible to put into context some aspects of Picasso’s work during their relationship together. Inside, letters and photographs were found that have helped to recreate both artistic and personal history. Inside the drawers of that trunk were envelopes full of photographs that immortalized her life together, her travels and even Picasso’s workshops; as well as letters (in both Russian and French) carefully tied with silk ribbons. The suitcase kept her dance costumes, including slippers, tutus, ballet programs, and more personal objects.

You can find more information on the Picasso Museum Málaga website here.

Approximately 350 objects, including paintings, works on paper, photography, letters, documentation and films, will be shown in this exhibition co-curated by Émilia Philippot, curator of the Musée national Picasso-Paris; Joachim Pissarro, professor of Art History and director of the Hunter College Art Gallery (New York); and Bernard Ruiz-Picasso, co-president of the Almine Foundation and Bernard Ruiz-Picasso for Art, FABA, and president of the Executive Council and member of the Board of Trustees of the Museo Picasso Málaga. For the Museo Picasso Málaga, the exhibition has been adapted by José Lebrero, artistic director of the art gallery, and Sofía Díaz, exhibition coordinator.

Every year the ICOM (International Council of Museums) network celebrates International Museum Day, and the Picasso Museum Málaga joins in with an open day. You can access the museum free of charge from 10.00 a.m. to 7.00 p.m. All the info here.

At Kessler Museum Merchandising we have been working with the Picasso Museum Malaga for many years and have made all kinds of products for them.

Today we show you this coloring set. It contains 4 sections: markers, pencils, waxes and watercolours. 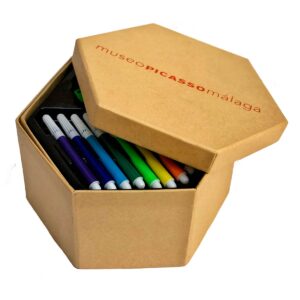